With rising college costs, a volatile job market, and shifting demand among employers, many youths are rethinking the merits of a four-year college. Tech and trade schools provide an alternative model for education, allowing students to focus specifically on career skills and quickly earn a degree or diploma. Tech school has a wide range of benefits, including:

Tech schools are considerably less expensive than traditional colleges and universities, allowing students to embark on promising careers without being saddled in debt beforehand. According to a recent study, the average college student must spend $127,000 for a bachelor’s degree; even at a public school, degrees can cost $80,000 or more. By contrast, a degree from a trade or tech school costs $33,000 on average, while trade school diploma programs often cost no more than $16,000. Add to this the cost of interest payments and lost income and many college graduates are tens or even hundreds of thousands of dollars behind tech school graduates. College students often have access to grants and scholarships, of course, but so do tech school students.

Compared to a four year bachelor’s degree, it takes two years to get a tech school degree and often as little as 9 months to finish a tech school diploma program. Not all tech school students graduate on time, of course, but neither do all college students. The two to three additional years you spend in college could instead have been spent earning seniority at a company. The extra years also add to the cost of your education, as you could have been earning money during this time. Assuming you would have made a salary of $30,000 a year after attending tech schools in Texas, college costs you $60,000 to $90,000 in lost wages. 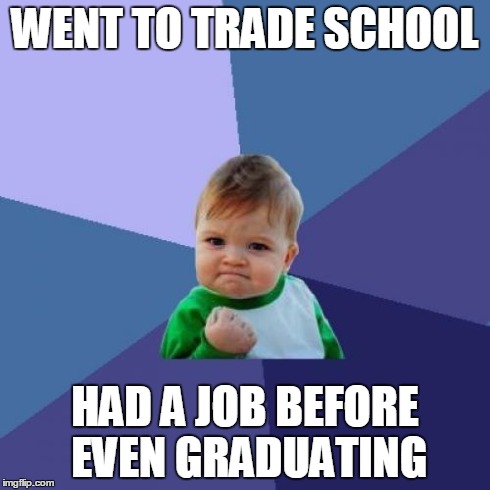 Networking is a central feature of all college education, but trade schools provide the most effective form of networking because they focus specifically on your career field. At tech schools in Texas, you’ll meet potential employers, co-workers, and business partners and will have ample opportunities to intern in your intended field. This makes it easier to get a job right after graduation.

Hands-On Education
Tech schools in Texas give you the chance to learn by doing. Instead of simply instructing you in a classroom, you’ll be given internships and other experiences that simulate what it is like to do the job in real life. This builds muscle memory and other, more intimate forms of knowledge, allowing you to begin doing your job competently as soon as you graduate. By contrast, traditional college teaches you a wide variety of skills, but you often have to figure out for yourself how to put them to practical use.

After-School Salaries
Tech schools in Texas are specifically designed to prepare you for fields with competitive salaries. By attending medical billing and coding school, for example, you can enter a field with a median yearly salary of $34,160; if you are good at this job, you can end up making more than $55,000 per year. Similar results are available to those who graduate from tech schools in medical assistance, business office organization, business accounting, pharmacy tech, and a wide range of other careers. Tech schools have a myriad of advantages for career-focused students, but that doesn’t mean you should write college off. The ideal career path for you depends not only on cost and study time, but also on your study habits, interests, and ambitions. For help choosing the right school and career, contact the Southern Careers Institute today.